La Cruz Street is inside Ricla´s historic centre. It started to be inhabited since the arrival of the new settlers, who camed to Ricla after Moors´ expulsion in 1610. The first thing that catches our attention is the village´s urbans morphology.
The Street recived this name from its first neighbourhoods, who deliberately adapted the cross as the identity mark of a neighbourhood  where muslins hadn´t lived.
This stone cross at beginning was located in the middle of the Street, then it was relocated in one of its sides. Later on it was replaced by the current forge placed in the same location.
More recently this cross get a different meanig, that is, as a funeral rite. When a member of the community died once the mass was celebrated the population accompanied the coffin to the cross, where people prayed the last prayers and said goodye to the dead person so as to be buried.
The Street south- east   north-east layout is due to the fact that it is squeezed under rocks where the rest of the castle and the main irrigation canal can be found. These characteristics will mark the sociological carácter and the desing, which is more on less stright without turnings.
These streets only reach each other by their endings, by the south east with Frisleva Street and by the noth-east with Arrabal Street and Taberna Vieja square.
This is the only arterial road, along with the Frisleva Street, that on the urban context of Ricla, still keeps a social hierarchy of the housing. In this way, we can designate the right ride buildings as mano r lordly houses, on the other hand we can find more modest houses in the left side. These main houses apart from organizing large and dark fronts of several floors, are provided with a garden, a vegetable patch and a stable in the back part of the house, accesible from the street. 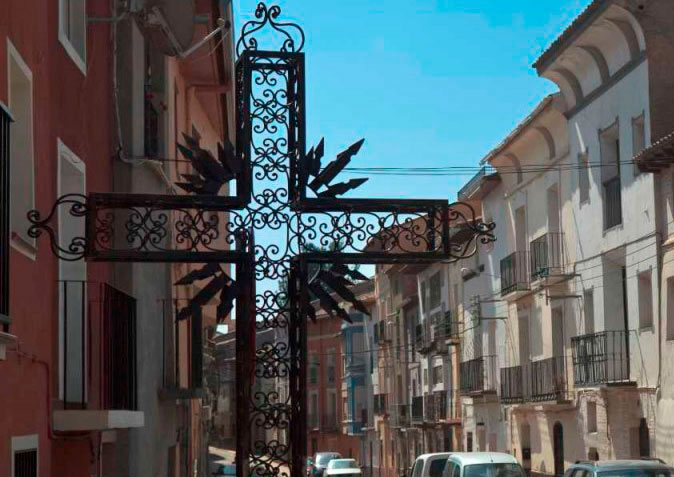