We reach the castle of Ricla by going up a narrow Street located opposite the church tower. The castle is perched high on a rock near the river that people accessed through an underground tunnel that is bricked up today.
The castle area extends 733 m2: 320 m2 for the building and the rest belongs to the courtyard.
Problably from a Muslim origin, it preserves ancient remains although the fortress was built in the XV or XVI century and took a great stately home shape. The castle has two blocks that lead to la Cruz Street and la plaza de España. In one of the corners, we observe the base of a fortified tower and some wall remains. From la calle de la Cruz Street point of view, we notice the castle defensive aspect since the building is hung by the rock with its mudwalls over the stone masonry remains. The castle has two balconies and some windows as a result of its restructuring from a castle to a palace. There is still a hall inside the palace covered by a gotic style paneled ceiling.
The main building’s facade is behind the town hall. The coat of armsis preserved chiseled on a rock that represents half of a moon as sign of the Luna family who used to live in the castle. Below the coat of arms there is a ceramic nameplate of Muel with the half moon and the year 1772 which is problably the date of the last remodeling.
The inside has been changed into a home, without leaving any sign of the historic features, although it still preserves one of the biggest original rooms, the Throne Room. 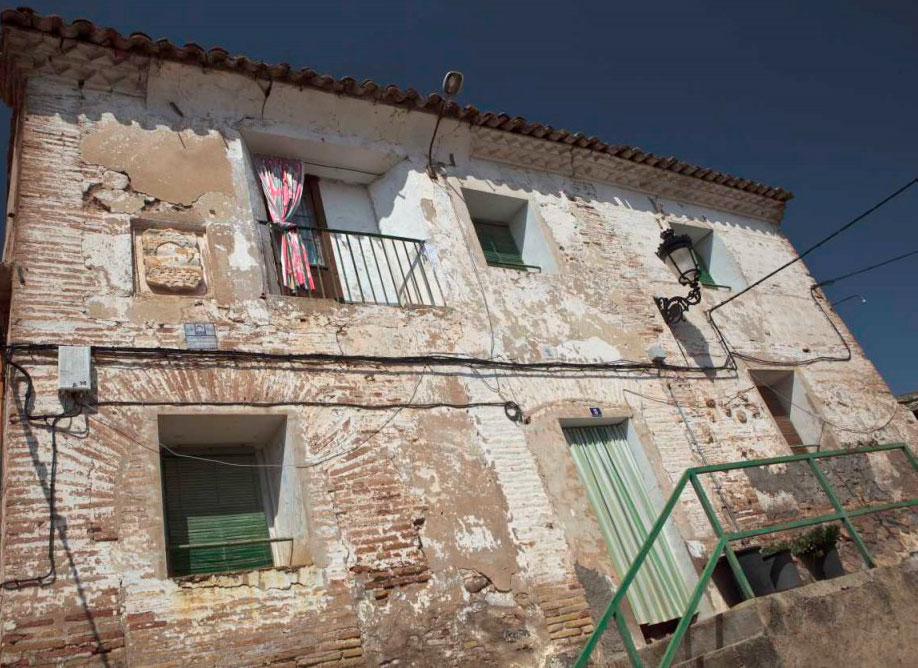